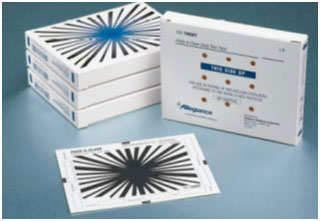 WHAT IS BOWIE DICK TEST?


Bowie Dick Test is a diagnostic visual test performed to ensure the dynamic-air-removal system (Vacuum system) of a steam sterilizer is effective in removing any air that may be trapped or leaked into the sterilization chamber. The test must be done before the pre-vacuum cycle and after the conditioning phase

CS technician must not use the sterilizer for prevacuum cycle if the unit does not pass the Bowie-Dick test.

Air trapped in the sterilizer chamber, affects the ability of steam to penetrate the load (wrapped instruments)

Bowie Dick consists of pack of special sheet of paper. The color change pattern of the sheet is used to determine the test result.

If at the end of the cycle, there was a UNIFORM color change of the test sheet, the test is considered NEGATIVE or passed. A successful Bowie-Dick Test means, load sterilization can begin with a pre-vacuum cycle

If at the end of the sterilization cycle, the color change was non-uniform or was patchy, the test is considered POSITIVE or failed. It means air is entrapped in the chamber

Note that the test should not be placed with any load in the chamber. The chamber must be completely empty except for the Bowie Dick test apparatus

WHAT CHEMICAL CLASS DOES BOWIE DICK TEST BELONG TO?

The Bowie-Dick Test is a Class 2 Chemical Indicator

WHEN TO PERFORM BOWIE DICK TEST

Dynamic air removal leak test or Vacuum leak test is used to determine whether the prevacuum autoclave chamber and plumbing system is air-tight.

It is used to verify the air-tight integrity of a prevacuum autoclave chamber and plumbing system.

In addition to Bowie-Dick Test, leak test should be done at least weekly in an empty chamber to ensure the prevacuum steam sterilizer is air tight.

Since leak test is more sensitive in air detection, it is performed when the prevacuum autoclave fails Bowie-Dick test

To effectively ascertain the absence of leaks in the sterilizer plumbing or seal, daily Bowie-Dick test is combined with weekly leak test. The two complement each other.